“There are decades where nothing happens, and there are weeks where decades happen”, as Lenin never actually said. The estrangement between the regime-state in Sri Lanka and its core constituencies, while widening over the course of the pandemic years, became outright antagonism in a matter of weeks in the first half of 2022. This is what sets apart the first half of 2022 from the years preceding it.

In the first three months, the train wreck in slow motion of an economy mired in debt derailed at last. What began as a financial crisis – the depletion of foreign exchange reserves – expanded, as it must, into an economic crisis – through shortages of imports critical to the production and circulation of goods and services and mobility of people. This in turn catalysed a socio-political crisis – in which the Gotabaya Rajapaksa presidency, and by extension the first family and the Sri Lanka Podujana Peramuna (People’s Front) government, became the lightning conductor for popular disaffection and anger.

In the following three months, a meteoric groundswell of citizens shook to the core the Rajapaksa Raj, achieving on 9th July its core demand of the defenestration of the Head of State, preceded over April-May by the banishment of this family from government office. However, the people of Sri Lanka have accidentally acquired another president, no less unloved, in the same month. The political theatre in the Diyawanna Oya on the morning of 20th July where Ranil Wickremesinghe as proxy of the former first family was elected to the presidency, has only validated the belief that parliament, like the presidency, is part of the same broken system that only serves its incumbents.

The failure of politicians to heed the people’s call for an interim all-party administration – fronted by a caretaker president and prime minister independent of party affiliation and of good public standing – only fuels the demand for an early general election to reselect representatives to the legislature while securing a popular mandate for abolition of the executive powers of the presidency.

Will the Wickremesinghe ascendancy be a transitional moment before it follows its predecessor into the dung-heap of history? Or will it stabilise the political order for a resurrection of the ancien regime? Will the prolonged political and economic impasse provoke deeper social discontent, or engender public passivity? In the interregnum, and the palpable weakness of a countervailing progressive pole, will Sinhala ultranationalists within political society and/or the repressive State apparatus (the uniformed) seize advantage and bid for State power? These and more are open questions, without predetermined outcomes.

Bittersweetness
The bittersweetness of this conjuncture in no way detracts from the extraordinary significance of the citizens’ movement now better known as the Aragalaya (Porattam/Struggle). This uprising is the closest our post-colony of 74 years has been to a people’s movement of national proportions, turned not one against the other, but together against those above us.

Much has already been written, not always informed, on the character and composition of the Aragalaya. This is a multi-class, multi-generational, multi-ethnic and multi-religious mobilisation. In its most visible manifestation in the form of regular street protests, rallies, and demonstrations, and the novel occupation of public spaces for conscientisation, it was more urban than rural and of the Sinhala South than North and East. Much of its energy and imagination must be credited to young men and women, previously written off as apathetic and individualistic, having imbibed the values of consumer capitalism. Indeed, they are more the children of the ‘open economy’ than their predecessors in the insurrection of the late 1980s who were its orphans. The occupations (IT, advertising and creatives, transport and logistics, services) and aspirations (middle class assets and social status) of the youth in the Aragalaya are those opened by economic liberalisation, even if falling short of promise.

Many young people, and no different from some older people who also identify with the Aragalaya, saw the non-traditional presidential candidate Gotabaya Rajapaksa as their answer to the failure of politics-as-usual. However, as the economic crisis took hold, this generation saw its future in Sri Lanka dissolve before it. Some before, and now, chose or were compelled to take flight in temporary or long-term out-migration. Others have chosen, or again are perhaps compelled, to fight for change amidst the chaos around them.

As cuts to electricity lengthened, instead of cursing the sweltering darkness at home, they took to the streets with lit candles and messages on placards. The smartphone generation took pictures and videos of their actions to supplement the memes that mercilessly pilloried the regime, communicating and organising through social media (YouTube, Facebook, Twitter, WhatsApp) with encouragement and amplification of their actions on electronic media by one private media house.

This movement began as one that sweeps away the traditional representatives of the people. It is an indictment and repudiation of existing institutions of civil society, ranging from political parties to trade unions, to non-governmental and faith-based organisations. In their current form, these ossified structures are yet to channel or co-opt this uprising. This is not to say that they are absent from the Aragalaya. There has always been a diversity of political ideologies represented among the protestors, old and young, beyond those of the Jathika Jana Balawegaya/Janatha Vimukthi Peramuna (National People’s Power/People’s Liberation Front), the Peratugami Samajawadi Pakshaya (Frontline Socialist Party), and the Inter-University Students’ Federation (‘Anthare’).

Platform
What is the platform of this movement? The social composition of the initiators of this citizens’ movement from among the self-employed, social entrepreneurs, the salariat in the private sector, and upper middle-class professionals has no doubt circumscribed its analysis of the sources of our present crisis and solutions to it. The issue-specific struggles of plantation workers, garment workers, farmers, schoolteachers, and university students over the past two years – and for far longer in the North and East for truth and justice for the disappeared, against land-grabs and militarisation – could not cohere even as a narrative on a system (social, political, and economic) that keeps failing the majority, leave alone an alternative to it. In any case, these struggles in isolation, no matter how heroic, cannot by themselves reverse the decline of an anti-capitalist consciousness within the working class and even the Left since the 1980s.

The proximate cause for the agitation of citizens has been the lack of cooking gas, kerosene, petrol, diesel, medicines and consumer items, and the soaring prices of food and basic commodities amidst hyperinflation, dislocating economic life and creating massive insecurity of income and livelihoods.

In a society where the state is everything, the rage of the Aragalaya became wholly directed at the government that drove the economy off the cliff, and the venal family at its wheel. Hence what is the Aragalaya’s unifying slogan of #GotaGoHome – extended to the rest of his family – for accountability for destroying (vinasakara) the country.

The rumours and stories of grand corruption by the Rajapaksas and their cronies gave rise to a second theme of the protest. This is to demand the return of the wealth of the people: speculated with no firm proof as in the billions of US dollars, and according to some protestors sufficient to repay Sri Lanka’s debt! This analysis of the economic crisis centres on the foolishness of the President and his advisors in monetary and fiscal policy, as well as the ban on agrichemical inputs. The prescription for its treatment is to sack an incompetent government and recover stolen assets.

So even as the hegemony of the Rajapaksas over Sinhala society crumbled, the dominance of neoliberalism, whose harvest of misery we are reaping in this crisis, is solid. There is no criticism within society of the economic dogma in place since 1978 nor the grotesque inequalities engendered by it. The parameters of the paradigm – a small and undiversified export base; extreme reliance on inward migrant remittances; addiction to imports of, and for, everything; incredible indebtedness through borrowing from domestic banks and external sources; assumptions of high inflows of foreign direct investment that never materialise; abysmally low levels of individual and corporate direct taxation; de-industrialisation destroying local production; and an agriculture and food policy based on monopsonies and cartels – have yet to be arraigned.

While the ‘system change’ demanded by the most forward-looking sections of the Aragalaya rightly includes abolition of the executive powers of the presidency, the democratisation of parliament, and the need for greater control and accountability over public representatives between elections; it stops short of seeing the degenerate political order as the other side of the coin of a despicable economic one that is unable to provide a dignified life and decent future for all.

B.Skanthakumar is a member of the Social Scientists’ Association of Sri Lanka. This is the editorial in Polity’s forthcoming print issue (Vol. 10 Issues 1 &2, June 2022). An earlier draft benefited from comments by Chulani Kodikara and Hasini Lecamwasam.

“People are starting to see that we were right”: Interview with University Students by Hasini Lecamwasam 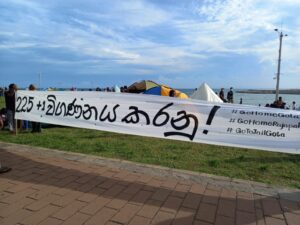