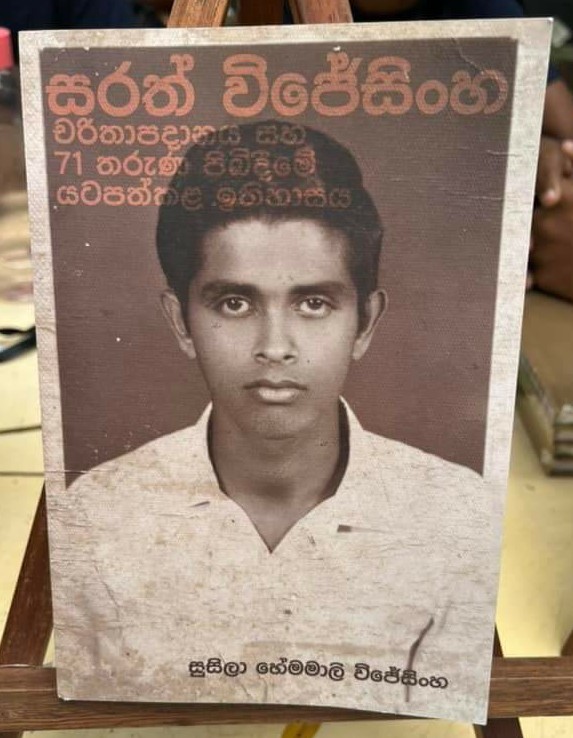 The title of this book review is borrowed from Svetlana Alexievich’s masterpiece, The Unwomanly Face of War (2017), where through interviews with female combatants — forgotten figures — the USSR’s involvement in World War II is explored. As opposed to dominant male narratives which have foregrounded heroism, victory, and masculinity in war, Alexievich explores “small things” such as women’s experiences of falling in love, getting short haircuts, curling hair with pine cones, and wearing combat uniforms. She narrates stories of the way women combatants did embroidery between shelling, and how they missed their children. The Soviet regime censored her book when it was first published in Russian in 1985, because it was not what they wanted to hear about their great victory against the Nazis.

Similarly, Susila Hemamali Wijesinghe’s Sarath Wijesinghe Charithapadanaya saha 71 Tharuna Pibidhime Yatapathkala Ithihasaya (‘The Biography of Sarath Wijesinghe and the Suppressed History of the Youth Awakening in 1971’) provides “its own colours, its own smells, its own lighting, and its own range of feelings” (Alexievich 2017: 10) about the revolt which are largely missing in male narratives on the events of 1971.

There is a vast literature on the 1971 insurrection, discussing many aspects from its social composition to structural causes. Moreover, several biographies (Alawatta 2021 & Jayasinghe 2019) and autobiographies (Dayananda 2012, Fernando 2021, Jayaweera 2021/1997, Kularatne 2019/1999 & Nanayakkara 2021) of former rebels were published and reprinted over the last few years. However, these works are by men and about men. There is only one recent study on women in the 1971 revolt (Hemachandra 2019) and it too is by a male. Therefore, Wijesinghe’s book about her brother(s) and the politics and history of the JVP appears in a context where the woman’s voice on the youth uprising is conspicuously absent.

The main protagonist of this book is Sarath Wijesinghe: Hemamali Wijesinghe’s brother who was a leader of the 1971 revolt and was killed by a fellow rebel. The book concentrates mainly on the human qualities and political history of Sarath Wijesinghe, and how JVP leader Rohana Wijeweera ill-treated him, possibly resulting in Wijesinghe’s untimely death.

Hemamali Wijesinghe’s recollections of her brother and his place in the 1971 revolt, as well as of the youth movement that became known as the JVP, are significant for many reasons. 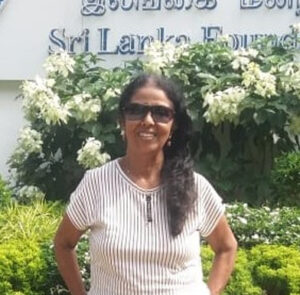 This is the first time that a woman combatant who was involved in the 1971 insurrection and a sister of one of its leading personalities is writing on the insurrection. She chooses to give prominence to a few personal themes in political activism. One such theme is family. ln many biographies and autobiographies of this period, there is only passing mention of the subject’s childhood and relationship with family. Instead, their narrative concentrates on political activism. In contrast, Hemamali invests approximately half of the book to discuss her parents and childhood; three of her brothers (her elder sister and youngest brother are somewhat hidden in the narrative); the affection between the siblings; and especially her close relationship with her elder brother, Sarath. She focuses on Sarath and his characteristics from a young age. She emphasises the importance of Sarath to her as a brother. In other words, the whole book can be considered as a testimony of sisterly love.

Also, she explicitly points out the devastation her family faced due to the loss of her two brothers, Sarath and Justin. As described by her, their family home was full of laughter and happiness; singing and music; jokes and fun times with each other. They were a relatively well-off family, through inheritance, in Kegalle; and Sarath was highly regarded in the community. However, these good times vanished following the revolt. Two of her brothers were killed, another was badly tortured, and Hemamali herself was on the run from the police. The family lost the comforts they had once enjoyed. They were disgraced due to their involvement with the quelled uprising. Finally, both parents died in May 1977 due to health issues aggravated by their post-1971 suffering.

Hemamali portrays an ideal family prior to the revolt, and the misery visited on them in its wake. There is nothing romantic about the revolt in her gendered telling. Hemamali herself has since struggled to move on with her life. Other narratives of the 1971 insurrection written by male rebels’ express repentance for their actions, blaming it on their manipulation by charismatic leaders, and welcoming the failure of the revolt. This has helped them to move on from the past and acquire a new life, personal and/or political, in the post-1971 period. That is not the case in Hemamali’s account; she too blames its leaders, but due to tragedies and injustices to her family, the past prevails over the present.

Secondly, her book presents a different truth on the youth revolt. According to the official and most popular narrative, the origin of what became the Janatha Vimukthi Peramuna (Peoples Liberation Front) begins in 1965; when the Russian-returned Rohana Wijeweera started to connect with different individuals and groups to form a revolutionary movement. Contesting this account, Hemamali provides a different narrative. According to her, Sarath was the one who initially created an island-wide movement, which Wijeweera and his group ‘Lanka Line’, joined in 1969. Soon after this Sarath Wijesinghe-Rohana Wijeweera coalition, Wijeweera unilaterally declared himself the leader of the movement. Sarath was thereafter side-lined from national leadership and restricted to Kegalle district. In Hemamali’s view, Sarath’s charismatic personality was envied by Wijeweera. She hints that his untimely death may have been orchestrated by Wijeweera and his henchmen. Hemamali states that the JVP has destroyed all photographs of Sarath’s involvement in the movement, to erase memories of him from the official narrative.

This is a highly controversial telling of the history of the 1971 revolt. Rather than rejecting or endorsing this account, I would prefer to consider it as yet another version, among several contested narratives. As I have discussed elsewhere (Hemachandra 2019: 17-22), the JVP from its inception, attempted to capture State power through military action. It had a rigid hierarchical structure where every planned activity was not necessarily disclosed to its membership. In other words, apart from their own assignments, members did not know what other members were mandated to do. Due to this isolation, every member had his/her own knowledge about the revolt which is different from another’s. This makes it difficult to produce a single truth on the revolt.  This book can therefore be considered as Hemamali’s ‘truth’.

Thirdly, this book discusses the role played by women in the 1971 revolt, which has been a neglected theme in its historiography. Hemamali, through her own experiences and brief descriptions on other women, points out how women laboured as much as men for the success of the revolt. She paints Wijeweera as a misogynist and describes instances of women in the movement challenging him. Women are no longer hidden in this narrative. Their roles in, and perceptions of, the revolt are acknowledged and made visible. These insights are valuable because it is the first time that a female rebel is writing about women in the 1971 revolt.

Finally, another neglected theme in the revolt is its cultural aspect. In my research (Hemachandra 2018) based on interviews with three former rebels, I tried to unearth this aspect and concluded that there was no cultural element in the revolt. All forms of entertainment such as singing, and dancing had been rejected by the Party. Interestingly, Hemamali’s narrative contradicts this finding, by illustrating several examples of revolutionary songs in the movement. Also, artistic engagements of her radical family in leisure times give a different colour to standard narratives of the revolt. These two themes – the role of women and cultural engagements of revolutionaries – have been missing in the popular perception of the revolt, and Hemamali’s account fills this gap.

However, there is a vital limitation in her narrative in relation to the subjectivity of the author. Clearly her close relationship to Sarath, clouds her judgment in some instances. Terms such as wiwurtha (open), awyaja (genuine), hurdyangama (heartfelt), pararthakami (philanthropic) and minissunta adaraya karana (loves people) are frequently used by her to describe Sarath’s character. In contrast, Wijeweera is depicted as a person suffering from bhinnodhmadi manobawaya (schizophrenic mentality) and hinamanaya (inferiority complex) resulting in envy (irshyawen purawalannak) of Sarath. In other words, Sarath and Wijeweera are described in binaries of good vs bad or saintly vs wicked.

Considering that her aim, as described in the book’s preface, is to give present-day JVPers the ‘real’ history of the revolt and make them aware of mistakes their leaders have committed, this visible bias towards Sarath and lack of even-handedness in descriptions of Wijeweera is likely to put off many current members and sympathisers. Indeed, she does not substantiate her claims about Wijeweera, and this in turn does not open space for a dialogue between the reader and the writer on the contested past of the JVP. Whereas, had she been more objective in assessing the main characters, the reader may have been able to evaluate the protagonists better.

Another limitation of the book is that there is inadequate discussion of the political subjectivization of Sarath. Hemamali gives a lucid description of Sarath’s childhood and his political activism, but she does not discuss how and why Sarath became a political subject. This is a vital theme to discuss in the present context. As we have witnessed in recent decades, people do not engage in politics. Instead, they participate in the political process as spectators (May 2008: 01). On the contrary, Sarath was not merely an onlooker; he actively contributed to politics to transform Sri Lanka. Therefore, it would have been beneficial to understand how and why Sarath became a political subject. In other words, what made him abandon his comfortable private space and university student life, and move into the public space? Hemamali’s interpretation of this seems somewhat spiritual. She attributes his revolutionary activism to his inherent humanity, which is not an adequate explanation of why he sought social change from an unequal order.

Though these limitations are present throughout the book, Hemamali’s story is a valuable contribution to knowledge on the 1971 revolt because it provides information on themes neglected in five decades of literature on the April 1971 events. Hemamali, in this respect, has given a womanly face to the unwomanly visage of a failed revolution.

Samal Vimukthi Hemachandra is a Lecturer (Probationary) in the Department of History at the University of Colombo.

Hemachandra, Samal Vimukthi. (2018). “Can Equality be Practiced through Doing Culture: An Analysis of Cultural Practices of the 1971 Revolt in Sri Lanka.” Paper presented at the International Research Symposium on Changing World, Challenging Boundaries, Colombo, December. 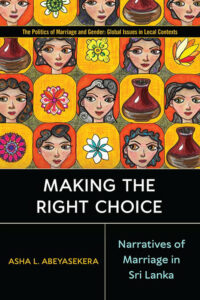 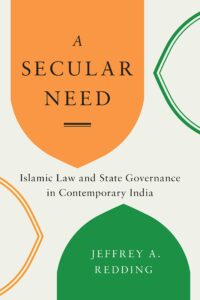