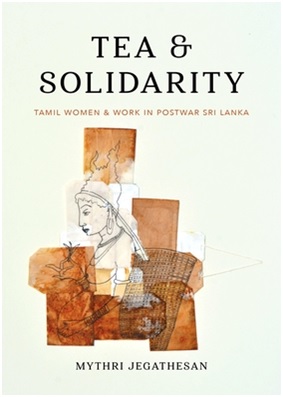 As anthropology continues to grapple with the colonial, racialised, and exploitative undercurrents of the ethnographic endeavour, decolonial and feminist approaches have emerged with a renewed force, charting paths for alternative enactments of knowledge production and new understandings of its aims and effects. In this context, Mythri Jegathesan’s Tea and Solidarity: Tamil Women and Work in Postwar Sri Lanka (2019) offers a powerful and vivid example of what such enactments can look like, and with that, a vision of how ethnography can uniquely contribute to understanding the political struggles of Sri Lanka’s minority communities. Focusing on the lives and labour of Hill Country Tamil women, the book reframes the task of ethnography away from representation and towards commensurability—telling stories that reflect those that Hill Country Tamil women and men workers “themselves wish to tell and hear” (40). For Jegathesan, in line with a decolonial and feminist ethic, this means relinquishing authority and asking her interlocutors what they want her to know and record and allowing this knowledge to “unfix” prior understandings (36). The stories reveal the open-ended, emergent movements of desire that infuse women’s personal investments, aspirations and attachments and disrupt the hegemonic narrative of Ceylon tea as national success. The ethnography traces this “poēisis of desire” as a process of “unbecoming” through which the Hill Country Tamil community is forging a different vision of its coolie heritage and “moving toward alternative futures of national and transnational solidarities” (39). In the process, the book deftly weaves together several critical interventions into the study of labour at the intersections of gender, ethnicity, caste, class and citizenship in Sri Lanka.

Through commitment to an embodied and affective engagement with her interlocutors and their experiences, Jegathesan’s ethnography excavates and unravels dominant narratives that have shaped representations of the Hill Country Tamil community—the trope of being fixed, physically and metaphorically, to the plantation landscape; of unbelonging within the fabric of the nation; and of disempowerment in the face of oppressive conditions. This further unsettles the forms of critique and knowledge production that dominate social science scholarship and human rights and development discourses. As Jegathesan argues, however well-intentioned and significant in naming historical injustices, these discourses reproduce “killer stories”, or instrumentalist narratives that centre exploitation, violence, and disempowerment while rarely if ever acknowledging the experiential “life stories” of women and their families as they articulate their desires and strive for a transformed future.

The chapters weave together archival and ethnographic material, poetry, and visual representations to reveal the colonial logics which continue to operate in the tea industry’s discourse about plantation labour and more importantly, to show how Hill Country Tamil workers, especially women, navigate and challenge this “inherited dispossession” (17). Focusing on the ways language and the idea of labourers as a natural and fixed element of the plantation landscape were instrumental to colonial planters’ efforts to control workers, Chapter Two deconstructs the trope of the coolie as a “silenced commodity” (54) and displays traces of workers’ refusal to be reduced to “labouring life” (61-63). This refusal resounds today in the aspirations to life and work beyond the plantation that Hill Country Tamil youth articulate and shows how the category of the coolie “was never instrumental to how workers themselves saw their labour, investments, and place in Sri Lanka” (76). Meanwhile, colonial planters’ anxieties about workers’ incontrovertible aspirations continue to echo in the Ceylon tea industry’s claims that it is in the workers’ interest to stay and sustain it.

The anxieties and refusals are both grounded in industrial stakeholders’ and trade unions’ historical and contemporary failures to recognise workers’ gendered experiences and of the plantation wage to accommodate workers’ kin-based obligations and desires for their families. This becomes apparent in the ways that migrant labour and relations of debt transform the very forms of life and kinship that workers seek to sustain (96). The reality of the less than living wage as “a condition of life whose logic of inhumanity they continue to struggle with, swallow, and accommodate” (99) disrupts the industry’s insistent illusion of care and “livability” on the plantations but also the wider, no less insidious narrative of poverty as the effect of moral failure or pathology.

The movement beyond waged labour on the plantation is tied to the ways Hill Country Tamils forge a sense of home, or ūr, on this industrial landscape while at the same time detaching from its claims on their labour. Challenging anthropological narratives that situate Hill Country Tamils belonging in South India, Chapter Four traces how line rooms on land they do not own nevertheless become “practiced spaces where workers and their families produce and consume ūr” (105) through material and affective investments. A sense of belonging emerges also in workers’ intimate knowledge of and embodied interactions with the landscape, in the language of labour, and in kinship ties. While denouncing the continued land dispossession the Hill Country Tamil community faces, the chapter explicitly rejects development and rights-based discourses that present these spaces as uninhabitable, as not home. Pointing to the dehumanising force of such representations, Jegathesan urges a more expansive understanding of home in the context of dispossession, which is “more compatible with Tamil plantation residents’ needs and desires” (115) and which affirms the political significance of their “rights-based claims to a place that was designated to flourish through their very labor exploitation” (124).

The critique of such “killer stories” and their negative effects within rights-based discourses is reiterated in the subsequent chapters. Chapter Five interrogates the hegemonic narrative of industrial care contained in the phrase “from the womb to the tomb” that attempts to “suture” the reality of exploitation and erases women’s reproductive labour and investments.  Here, women’s stories of sterilisation operations—accompanied by body mapping and women’s own drawings of their scars—and life trajectories as grandmothers and widows serve as “counter-sutures,” attesting to their embodied experiences and capacities within the context of structural violence but also kinship ties, values, and aspirations. Chapter Six examines “the politics of labour shaming” that operate in trade union and rights-based discourses to stigmatise migrant domestic labour and blame women for their choices. Challenging these pathologising narratives, Jegathesan interrogates how class, caste and ethnic discrimination as well as restrictive state policies shape Hill Country Tamil women workers’ labour. She calls for more nuanced understandings of migrant work that “dignify the decisions and desires of Hill Country Tamils in the context of their labor heritage” (174) as well as more meaningful forms of solidarity that grapple with the realities of intimate, informal migrant labour as a source of prestige and shame (173).

The final, Chapter Seven will be of particular interest to activists and development practitioners. Detailing the implementation and outcomes of a transnational human rights youth programme for girls in the United States, Sri Lanka, and Chile, Jegathesan probes how programmatic definitions of success and official narratives could not account for the complicated trajectories of participants’ lives, especially those whose social realities prevented them from embodying the empowered “girl subject”. Yet it is precisely those stories which disrupt normative development discourses and open up possibilities for centring women’s own experiences and forging an ethical gender justice praxis (190). In contrast, the Working Women’s Front, a women-led trade union, offers a powerful example of the kinds of solidarity that emerge when women’s experiences, needs and leadership are foregrounded. Recognising the role that international development, human rights and unionisation play in processes of social change, the chapter concludes with a call for a “revised ethics of gender justice” that gives space for women’s own articulations of how they want to be seen and valued (200).

Mythri Jegathesan’s Tea and Solidarity is a work of deep intellectual, emotional, and embodied engagement with her interlocutors and the landscapes imbued with their histories and desires. The ethical and political commitments that guide the author’s research praxis are equally salient in her evocative writing. In conveying the textures of experience—her interlocutors’ and her own—Jegathesan lays bare the affective and relational processes through which ethnographic insights emerge. The analysis brings together the scholarly and everyday registers of language and theory as well as tacit forms of knowledge to deconstruct the tea plantation as a place of imperial nostalgia and to engender new ways of thinking about and seeing the past and present of the Hill Country Tamil community within Sri Lanka.

This revisioning is imperative in the face of the community’s, and especially women’s, continued struggle for labour rights, economic justice, and recognition as the “backbone” of one of Sri Lanka’s most economically and culturally significant industries. Most recently, the Sri Lankan government affirmed plantation workers’ entitlement to a 1000 rupee daily wage, but reports suggest that companies have responded with repressive tactics such as increased targets and extended work hours (Thevarajah 2021). This is in the context of the industry’s relentless pressure on workers to keep labouring in conditions of heightened risk during the ongoing Covid-19 pandemic. The book renders the stakes of these struggles beyond the “killer stories” of human rights and development discourses that obscure people’s complex experiences and enactments of agency and remain on the margins of the wider national and global story of Ceylon tea.

Tea and Solidarity makes a profound contribution to anthropology and labour and gender studies in Sri Lanka and to wider disciplinary conversations about research ethics and praxis. It also has significant implications for the work of rights-based and development organisations and labour activists. Mythri Jegathesan’s words capture the political realities she is writing about, but also the process of writing in solidarity with, alongside, or otherwise, following the voices and desires of her interlocutors. In this way, the book affirms the imperative for decolonial approaches in anthropology and research more broadly and maps the salient political, ethical, and intellectual possibilities they engender.

Nadia Augustyniak is a PhD candidate in cultural anthropology at The CUNY Graduate Center in New York City.