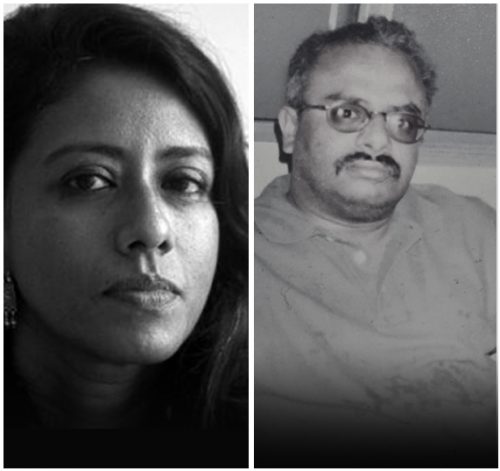 It is with deep sadness that Polity marks the untimely loss of not one but two great Sri Lankan scholars Malathi de Alwis and Qadri Ismail in the space of five months of each other. As Andi Schubert observes in his tribute to Qadri for Polity, they were both part of a generation of Sri Lankan intellectuals who came of age in the late 1980s and who made a significant contribution to our understanding of questions of identity, ethnicity, nationalism, gender, violence, and resistance in Sri Lanka, while introducing key concepts and ideas from post-colonial, post structuralist and feminist theory to Sri Lankan readers.

Indeed, their early scholarly writings were in fact contributions to Pravada, the predecessor to Polity and two collaborative reading and writing projects with the International Centre for Ethnic Studies (ICES) and the Social Scientists Association (SSA), which are now considered classics of social science scholarship on Sri Lanka: Introduction to Social Theory (1994), edited by Radhika Coomaraswamy and Nira Wickramasinghe and Unmaking the Nation: The Politics of Identity and History in Modern Sri Lanka (1995) edited by Pradeep Jeganathan and Qadri Ismail. Both gesture to the generative potential of inter-generational collaborative intellectual engagement.

Malathi, on completing her PhD in cultural anthropology at the University of Chicago, made the conscious choice to return to Sri Lanka. She would work closely with ICES, SSA, and Kumari Jayawardena till the mid 2000s. During this time, she collaborated with Kumari Jayawardena on two important publications: Embodied Violence: Communalising Women’s Sexuality in South Asia (1996) and Casting Pearls: The Women’s Franchise Movement in Sri Lanka (2001). Casting Pearls sought to recover the history of the women’s franchise movement in late colonial Ceylon. Embodied Violence brought together a group of feminist scholars to interrogate the “alarming spread of fundamentalism” in South Asia and the ways in which women’s bodies become sites of contestation to appropriate institutional power, including within the family.

Malathi was also part of the first iteration of the Cats Eye column, authored by a collective of feminist writers initiated by Kumari Jayawardena, which first appeared in the Lanka Guardian in the 1980s. In 2000, Malathi compiled a selection of the best of these articles in Cat’s Eye: A Feminist Gaze on Current Issues. Around mid-2000, Malathi started teaching on the Women’s Studies course of the Faculty of Graduate Studies of the University of Colombo, later renamed the Gender and Women’s Studies course. She would become one of the most beloved teachers in the programme, and was still teaching and mentoring there almost until her death.

In 2016, she started helping the German Agency for International Cooperation (GIZ) to conceptualise its work on memory and commemoration in post-war Sri Lanka. In partnership with the Memory Culture Project of GIZ, she conducted a number of “memory walks” and “memory matinees” herself. The walks were guided walking tours around the city of Colombo designed to take participants on a journey through the places and events that have shaped the city’s modern history. The matinees were informal conversations with notable figures to share memories of their childhood and life in Colombo.

At GIZ, she also worked with Hasini Haputanthri, on the Archive of Memory, an oral history project which compiled 70 “narrative fragments” that recall turning points in our history through mundane, everyday objects as well as unique artifacts and souvenirs. Designed to mark 70 years of independence in Sri Lanka, the Archive of Memory interrogates the celebratory impulse that tends to dominate such events and the erasure of other more turbulent and violent historical moments.

Malathi’s PhD thesis entitled Maternalist Politics in Sri Lanka: A Historical Anthropology of its Conditions of Possibility, completed in 1998 examined the Mothers’ Front that emerged in the wake of the second southern insurrection, demanding truth and justice for disappearances. She was amongst the first group of feminist scholars around the world to begin theorising the politics of motherhood in the wake of mass atrocity in the late 1980s and 1990s. In doing so, she was concerned, not with a detailed ethnography of the Front as such, but by a much broader imperative to understand the “cultural categories that undergird (its) maternalized political space,” in particular the categories of domesticity, respectability, and suffering as articulated within Sinhala Buddhist nationalism. These themes would become lifelong preoccupations for her. She would return to them over and over again, building on or revising her old analysis or taking them in a slightly different direction, like her more recent work on memory and monuments.

Qadri was educated at the University of Peradeniya and at Columbia University in New York. He graduated from the University of Peradeniya with a First Class in English in 1984, reportedly the first produced by the Department after his teacher, Prof Ashley Halpe in 1956. After a relatively brief but memorable stint as a journalist, Qadri (re)turned to academia after he was awarded a Fulbright-Hays Junior Fellowship at Columbia University, New York in 1989 from where he obtained an MA in English in 1992. He chose to continue his studies and read for a PhD in English at Columbia where he was supervised by Edward Said and Gayathri Spivak. His PhD, submitted in 1998, was titled Constituting nation, contesting nationalism: gender, subalternity and community in South Asia. Even before he had submitted his PhD, Qadri was recruited by the Department of English at the University of Minnesota as an Assistant Professor in 1997. At the time of his untimely death, he was a full Professor of English at the University of Minnesota.

He had key engagements with the conversations taking place in the Subaltern Studies Collective during the mid-1990s and contributed a chapter titled “Constituting Nation, Contesting Nationalism: The Southern Tamil (Woman) and Separatist Tamil Nationalism in Sri Lanka” to Subaltern Studies, XI: Community, Gender and Violence (edited by Partha Chatterjee and Pradeep Jeganathan and published in 2000). The other contributors to this volume included Amir Mufti, Nivedita Menon, David Scott, Pradeep Jeganathan, and Gayathri Spivak.

His work was also published in a number of leading international journals such as Economic and Political Weekly [“Boys Will Be Boys: Gender and National Agency in Frantz Fanon and the Liberation Tigers” (1991)]; Social Text [“A Bit of This and a Bit of That: Rushdie’s Newness” (1991) and “Batting against the Break: On Cricket, Nationalism, and the Swashbuckling Sri Lankans” (1997)]; Cultural Critique “[(Not) at Home in (Hindu) India: Shahid Amin, Dipesh Chakrabarty and the Critique of History (2008)], and Postcolonial Studies [“Discipline and colony: The English Patient and the crow’s nest of post coloniality” (2010)].

He kept contributing to a number of local journals such as Pravada (a short bibliography of these entries appear below), Phoenix: Sri Lanka Journal of English in the Commonwealth (published by Sri Lanka Association for Commonwealth Literature and Language Studies), and the Sri Lanka Journal of Humanities. Earlier he was a frequent contributor to the Lanka Guardian in its heyday in the 1980s, memorably sparking a stormy debate in 1985 with a series of controversial articles questioning the capacity of a Department of English to equip its graduates with the analytical skills and concerns to respond to the pressures of both decolonisation and violence in a country like Sri Lanka.

Malathi thought of herself as a “scholar-activist” very much involved and invested in the women’s movement in Sri Lanka. In an interview in Meridiens, she stated:

I think it is crucial to reinforce the possibility of being both an academic and an activist because there is too frequently a separation of them despite the fact that one of the central tenets of feminist politics is that practice informs theory and vice versa. This is not to say that such a wholism and commitment is easily attained in the minutely specialized world we live in today. Academia is still fearful of those who are perceived to be too interested, too political, and frequently seeks to de-legitimize them … Similarly, full-time activists may resent scholar-activists for their ability to move in and out of multiple spaces. They often remain estranged from each other … In order to sustain those who wish to inhabit both the spaces of scholarship and activism, however fraught or tenuous such a position might be, calls for a show of good faith and understanding from those who wish to – and sometimes may not have a choice but to – inhabit only one pole of this divide. (Meridians Round Table on Peace 2001: 109-110)

She was a member of Women for Peace, an autonomous, Colombo based, multi-ethnic, multi-lingual, and multi-religious group founded in 1984. On its disintegration in the 1990s, she turned her ethnographer’s eye towards her own political activism. This desire to put herself under scrutiny came out of questions that she grappled with relating to the relationship between feminism and anthropology, concerns about whether you can speak from within the domain of feminist politics rather than about it; and how anthropologists who are also feminists can frame research questions about political struggles in which they actively participate and intervene.

Qadri was a journalist before he became an academic. Despite his First Class degree which would have assured him a teaching position, Qadri chose to be a reporter in some of the major English newspapers. He made his name as one of the more incisive commentators on the violence that was engulfing the country in the 1980s. It was following a near brush with death while covering the Indian Peace Keeping Force (IPKF) operations in the North, that Qadri chose to switch tracks and explore the options open to him in academia. In an article for Pravada in 1992, Qadri described himself as a “post-journalist”.

Being based in the USA made it more complicated for Qadri to engage with Sri Lanka in the same way as Malathi who lived and worked in/from Sri Lanka. But the desire to intervene, to contribute, and to engage never seemed to be far from his mind. He was a steady contributor to the citizen journalism site Groundviews, particularly after the end of the war in 2009; and also to Artra to which he wrote extensively about art. He was also quite generous with his time during his frequent visits to Sri Lanka, often conducting small classes with those interested in learning about critical theory through spaces like Theertha and the ICES.

Both Malathi and Qadri will be sorely missed in scholarly circles and beyond. While the void left by their passing can never be filled, we hope that the tributes to them in Polity and elsewhere will serve as a memorial to two scholars who sought to intervene continuously, sensitively, and critically into the priorities of their times. We hope that the republication of a fragment of their work on Polity (online and print) will also serve as an invitation to read Malathi and Qadri’s writing afresh and to take up the concerns and commitments that inspired their endeavours. This may be the most significant tribute to their lives and interventions as public intellectuals in Sri Lanka.