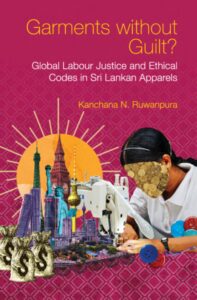 Garments without Guilt? Global Labour Justice and Ethical Codes in Sri Lankan Apparels by Kanchana Ruwanpura uses an analytical framing informed by labour and feminist perspectives to explore how workers are central to the shaping of geographies of multinational corporations’ ethical codes in the apparel industry. Drawing on over a decade of rich ethnographic fieldwork, the book demonstrates that Sri Lanka’s ethical sourcing landscape is rooted as much in workers’ struggles and agency as it is in capitalist and State driven initiatives. The book highlights defining moments in the country’s recent history to challenge dominant narratives about the garment industry and demonstrate the centrality of labour in the success of Sri Lanka’s self-proclaimed ethical sourcing destination label.

The book is of eight chapters. Chapter two delves into the theoretical considerations that shapes its premise. The author draws on both feminist and labour geography (Herod 2001: 2003) literature, and importantly connects these two parallels, which have mostly bypassed each other in existing works. It is evident that these two lenses allowed the author a richer analysis of both the place of labour and the institutional frameworks within the ethical regime landscape as well as the intersection of the two. As the insightful and illustrative narratives of Chapter three demonstrate, this book is the result of a study that has been carefully developed and nurtured for over a decade from 2008. The author’s primary data comes from seven and a half months of ethnographic fieldwork in two garment factories, as well as from multiple perspectives and continuous engagement of industry authorities, civil society organisations, trade unions, factory managers, and owners at different times in the ensuing decade. In Chapter four, the author probes the evolution of the industry since market liberalisation in the late 1970’s. The author pays particular attention to the decades of 2000 and 2010 and explains how, in a post-MFA (multifibre agreement) context and amidst a global recession (2008 onwards), the Sri Lankan apparel industry has successfully managed to cultivate dynamic growth.

Chapter five is centred on labour geography and starts by examining the labour struggles and social movements in the apparel industry (Kearney 1971; Jayawardena 1972; Biyanwila 2011) that have been largely neglected in the narratives of ethical sourcing. Chapter six takes its starting point from feminist contributions on the apparel industry’s women workers (Elson and Pearson 1981; Ong 1987; Enloe 1989). Within this genre, the existing narratives have mainly centred on the cultural politics and social lives of labouring women, as well as the ways gendered regimes both shape and are shaped by apparel production (Salzinger 2003; Wright 2006; Lynch 2007; Hewamanne 2008; Kim 2013). Moving beyond this focus, the author’s contention is that we also need to understand the key governance agendas shaping the everyday working lives of labourers, as ethical trading regimes are part of the neoliberal global architecture that claim to advance conditions of work and engender labour justice. In Chapter seven, the author moves to the post-war North and East, where a hitherto untapped labour force was treated as a lucrative market opportunity by capitalists. The author investigates how this worked out for an ethnic minority labour force still reeling from the aftermath of the war and dealing with unresolved post-war trauma.

This book primarily explores two key questions that have received less attention in the existing work on private governance regimes. First, “how has the apparel industry in Sri Lanka successfully carved out an image of ethical sourcing?” On the one hand, Sri Lanka is one of the first countries to adopt lead firms’ (multinational corporations’) codes of ethics, which requires garment factories to abide by certain labour standards, usually derived from ILO conventions (Ruwanpura 2016). On the other, Sri Lanka has its own unique campaign called ‘Garments Without Guilt’, after which the author has named this book. These two initiatives have made it possible for Sri Lankan manufacturers to position themselves as an ethical sourcing destination for apparel in the world. And this self-proclaimed declaration largely goes unchallenged. How is it possible? The author argues that these kinds of global governance initiatives do not exist in isolation. They shape and are shaped by on the ground social, economic, and legal frameworks. In this context, the author sets out to examine how far labour justice can be attained locally by private governance regimes and the limits and promise of such interventions. This book is thus clearly driven by the need to understand the existing, on the ground, legal frameworks and social welfare standards that facilitate the implementation of private governance regimes, and more importantly, build upon these private initiatives.

Second, “Where is labour’s voice within these ethical regimes”? The author argues that to appreciate the country’s relatively strong social institutions and pro-labour legislation, we also need to get a sense of the place of labour, in other words, workers in it. How have workers and their struggles shaped these institutional frameworks that made it possible for lead firms to capitalise on their ethical branding? The author makes the case that it is the voice of workers, buttressed by education and labour legislation, that matters in upholding ethical governance regimes in the Sri Lankan apparel industry. Even though workers do not choose their conditions, they however continuously play a role in reproducing and shaping them, thereby reworking and politicising the constraints that they find in the industry today (see also Jayewardene 1972; Gunawardana 2007). As the author points out, these previous labour accomplishments are rarely acknowledged, and in fact, are threatened with restructuring and/or unfavourable labour law reforms. Such attempts suggest that capital might be complicit in unwittingly “kicking away the very ladder that helped it rise” (p.147). The importance of the often-muted forms of agency that is manifested through gender and class identities and social relations of workers is amply demonstrated in this book. The book makes the case that the everyday choices and actions of workers strongly resonate how they perceive their workplace, and imagine their work and working selves (Lynch 2007; Hewamanne 2008).

Against this backdrop, the author successfully demonstrates that the Sri Lankan apparel industry did not achieve its ethical credentials alone. This was achieved with the help of pre-existing labour legislation, a historically strong social welfare fabric, and collective labour struggles. Together, these building blocks have provided the necessary foundation for the apparel industry to succeed and also to take transformative steps towards becoming a regional hub and a design centre for apparels. Having noted this, in the latter half of the book, the author observes that ethical codes are applied unevenly in the industry across time and space. A classic example is where the codes take on entirely different connotations in post-war regions, especially from labour’s standpoint, with instances of low wages, forced labour, discrimination, and verbal abuse widely reported. These uneven applications of ethical governance regimes in the post-war areas reveal how structural hierarchies, ethnic politics, and material inequalities have shaped ethical governance regimes. In particular, the naturalisation of ethno-nationalism and militarised relations inhibit the apparel industry from recognising that its ethical record is increasingly resting on fragile ground. As the author points out, this is also a potent symbol of the degree to which militarised relations have been normalised, and also of the compromised role of the State as a regulator and the guardian of the previously hard-won social welfare standards.

Notwithstanding the impressive findings and arguments made, the book would have further benefitted from an extended attention to informal apparel workers and apparel workers in subcontracting factories in Sri Lanka. The informal work where workers labour for daily wages is rampant in the industry, especially in Export Processing Zones (Hewamanne 2020; Wickramasingha and Coe 2021). While informal work provides labour flexibility and autonomy to choose when to work and when not to work, the sector has its own inherent structural weaknesses, where informal work is not as regulated in the apparel industry as formal work. As such, informal workers are not covered under most regular labour laws, lead firms’ codes of ethics, and other private regulatory interventions (Skanthakumar 2019). This means informal workers have little to no legal and institutional protection, limiting their ability to exercise their rights and access material benefits and compensation. Similarly, subcontracting is prevalent in the industry where small scale manufacturers process orders for large scale, direct manufacturers. While lead firms’ ethical codes and private governance regimes are negotiated between lead firms and direct manufacturers, it would be helpful to further nuance out how ethical codes perform in subcontracting factories. This would extend our understanding of how the geographies of ethical codes and private governance regimes can be mediated by informal and subcontracting workers.

In conclusion, this book indeed is a “scholarly tour de force”. It comes at a critical juncture in the global apparel industry, where the legitimacy of private governance regimes has received renewed attention against the backdrop of the Covid19 pandemic. The author makes a compelling case for the limitations of private governance regimes and the national legal frameworks in securing decent work in the Global South, and the dangers posed by the illusions of ‘ethical sourcing’ as a well-maintained façade in the industry with limited actual currency. In this respect, this book offers inspiring reading for not just students and scholars of labour, global production, and development, but also a wider audience beyond academia, including but not limited to industry authorities, civil society, and worker organisations.

Shyamain Wickramasingha (PhD, National University of Singapore) is Visiting Research Fellow at the Institute of Development Studies in Sussex and contributor to ‘Labour Regimes and Global Production’ (Agenda Publishing, Newcastle-upon-Tyne, 2022) and the author of ‘Conceptualizing Labour Regimes in Global Production Networks: Uneven Outcomes across the Bangladeshi and Sri Lankan apparel industries’(Economic Geography, 2021).

A History of Unfortunate Circumstances – Hasini A. Haputhanthri
‘A Day in July 2019’ by Rajitha Dissanayake, 2022, Lionel Wendt, Colombo