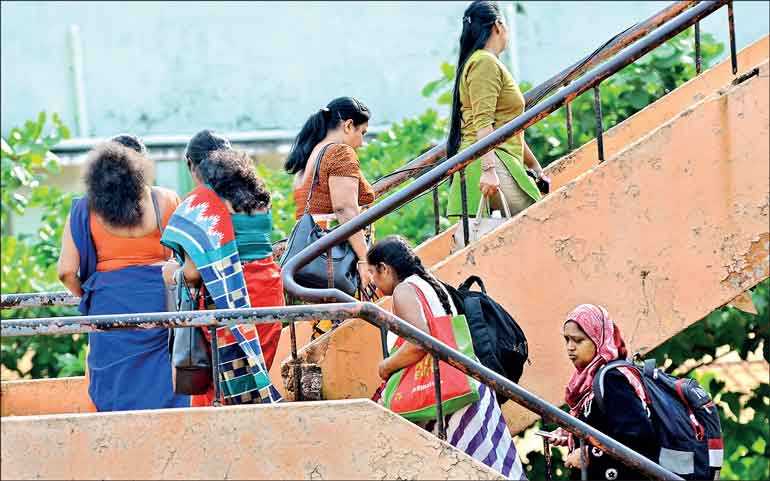 Experts keen to endorse the International Monetary Fund’s (IMF) tentative programme for Sri Lanka have attempted to highlight the supposedly progressive aspects of its intervention to try and rescue the country from economic collapse. The IMF’s prescriptions for structural economic reform in Sri Lanka will likely include “increasing female labour force participation”. On the face of it, there should be no controversy over decisive action to expand the representation of women in the labour force from the low level of 32% (in comparison to 71% for men), through removing barriers to their access to and retention in waged work.

However, as Ahilan Kadirgamar has observed in an OpEd for The Hindu newspaper, any attempt to use this problem to justify market-oriented reforms would likely entail “forcing women into the workforce.” It would be window dressing for the IMF’s proposed package to deal with Sri Lanka’s worst economic crisis since independence. This passing reference has been seized upon by those generally sympathetic to IMF intervention, in a misinterpretation of Kadirgamar on this matter. Because of Kadirgamar’s terse phrasing of the problem, some saw an opportunity to interpret his argument in terms of the problematic assumption that women should not work at all. In this way, they have tried to delegitimise the broader critique of market fundamentalism.

Nevertheless, the bigger point remains that workers in general, as Marx famously put it, are forced to sell their labour to survive. Women often experience a double burden because of patriarchal structures requiring them to perform both unpaid reproductive work in the household and to earn a living, which employers frequently use as a justification to pay poverty wages. Accordingly, in the absence of critique, even the IMF’s more innocuous recommendations are likely to justify its broad macroeconomic conditionalities for an agreement, such as raising energy prices, which would in fact worsen the burden of social reproduction.

In this regard, the call to increase female labour force participation cannot be extracted in a piecemeal way. Instead, it must be thought within the entire devastated economic context in which momentous reforms are being proposed. The overall impact of an IMF programme that prioritises slashing State spending during an already severe economic depression would be to force more people, women especially, onto the market into precarious, casualised, or otherwise hyper-exploitative jobs. Taking the debate on women’s role in the economy forward, then, requires a far more critical analysis.

The Ideological Construction of Women in the Workforce
One of the difficulties has been that the IMF’s promotion of the participation of women in the workforce has not been accompanied by a critique of the industries in which poor women are often employed. Eager to produce commodities on the cheap for predominantly Western consumers, employers in many parts of the global South have frequently used the argument that ultimately everyone will benefit from the rising tide of globalisation to justify wage repression. This contradiction spawned a decades-long academic debate about the degree to which women workers in low-wage industries such as the garment industry could nevertheless be considered empowered agents who could articulate their own identities in opposition to the dominant order.

There was further discussion about the extent to which the classic model of industrial unionism inhibited this task, because of a greying, often-male leadership that has represented the trade unions. These questions must be taken seriously. In Sri Lanka, a few, more self-critical male leaders, such as Linus Jayathilake, sought to engage under-represented groups within union spaces, and the loss of the link to the earlier history of organised labour is deeply felt. But progressive alternatives are far different from the IMF’s proposal to simply increase female labour force participation, either as a panacea, or even as justification for promoting a more flexible labour regime by dismantling existing labour law.

The IMF’s historical interest, along with the creditor countries it represents, has been to impose punishing budget surplus targets on indebted countries. As a result, women are often the first to experience the brunt of these reforms. Because patriarchal ideology is a cross-cultural phenomenon, women are forced to bear the burden of household tasks. Accordingly, cutting back on social services and welfare means women must perform more unpaid labour. Meanwhile, when better-paying industries collapse, women are forced to earn for their families as well by accepting low-paid work.

This problem has been referred in terms of a captive labour market, in which employers use gender, ethnic, and other hierarchies to exploit wage differentials between groups of workers. This does not mean, of course, that those industries in which men have historically earned higher wages have not been exclusive in their own ways. But the solution should not be to justify the creation of low-wage work as female empowerment. Instead, we must think critically about the kinds of jobs, especially in rural-based industries, that women have lost, and which could be regained by creating and investing in industries in which they could be paid better and enjoy a broader set of freedoms in the workplace.

The theoretical problem is that social reproduction has been unproductively counterposed to work. Women’s household work has been made invisible in the discourse on female labour force participation. The goal of highlighting the burden of the former is not to argue that women are “natural” caretakers, but that the historically evolving needs of social reproduction must come first in determining the types of industries in which women could also find good jobs. The expansion of these areas of the economy must be predicated on de-commodifying livelihoods, while challenging patriarchal ideology.

The debate in the advanced industrial countries has taken off from this point, having emerged out of the feminist work on social reproduction pioneered by authors such as Silvia Federici. Scholars and activists have highlighted the need to expand the care economy to cope with the effects of climate change and to promote decarbonisation. Yet in Sri Lanka and many other parts of the global South, the donor-funded framing of female labour force participation in new industries has often been that it is an unmitigated good. This perspective has too often ignored the savage effects of austerity on the ability of women to sustain their households, and their further exploitation in low-wage industries.

Moreover, even the economic methodology and statistics used to calculate women’s participation in the labour force are problematic. The reality is that around 60% of workers in general participate in Sri Lanka’s informal economy, making women’s actual economic contribution difficult to capture. The tendency to emphasise formal waged jobs over work in the informal sector means that even those experts who claim to be sympathetic to the marginalisation of women in the workforce ignore structural challenges, such as the predominance of household indebtedness. Critiquing the economic marginalisation of women must involve a holistic perspective that also considers extraction, including the role of predatory finance companies.

Accordingly, we must integrate the household debt crisis into our perspective on women’s role in the economy, which is compounded by the national debt crisis. The economic depression has increased the strain on women’s ability to sustain their households, as evidenced by heart-rending stories circulating in the media. High-flying rhetoric about increasing female labour force participation in service-oriented sectors of the economy deflects from the urgent need to confront the ongoing process of dispossession. To overcome what has now become a full-blown economic depression requires strengthening services and other forms of social support, such as subsidised prices for food and energy. These and other forms of state spending are precisely what the IMF aims to curtail through its harsh conditionalities for macroeconomic adjustment. These costs cannot be waved away by gesturing toward a new economy that is not grounded in the immediate, concrete needs of women desperate to sustain their households.

Opportunities for Empowering Women Through Self-Sufficiency
Earlier, the ideological justification for exploitation and dispossession was that economic globalisation would lift people in developing countries out of poverty. Now that globalisation is under the worst strain in decades, and the effects of depression have unleashed existential changes to State and society in Sri Lanka especially, we must reconsider this narrative. Initially, when I did my own fieldwork on the export garment industry in Sri Lanka, I came across many people, women especially, who recognised the inherent exploitation in the industry. They argued that because of the loss of economic opportunities in the rural areas that they were from, for example, they had no other choice to backbreaking work on the production line. It is also true that, to the extent possible, many of them tried to see it as an opportunity to socialise in the factory. They could participate, in however brief and circumspect a way, in the public sphere. The factory could even offer a space to critique, for example, domestic violence.

But the real paradox was that while employers supposedly celebrated the visibility of such “empowered” women in their corporate branding exercises, they were eager to clamp down on their unions and other labour organisations when they tried to organise; meaning, when the presence of women workers became a threat to the interests of the capitalist class. Amrita Chhachhi noted a similar phenomenon in her own work on the demographics of the workforce in the Indian electronics industry. She examined why employers always appeared to prefer young, single women with fewer social connections to those who were older and more likely to participate in unions.

Now, however, there is an opportunity to reconsider the whole field of investment that previously justified the exploitation of workers in low-wage industries. If we are to consider the new types of economic activity that could enable women to overcome the rigid barrier between public and private, then perhaps we have an opening to think about the necessary investment in terms of services. These could support women by de-commodifying the essential aspects of theirs and others’ livelihoods, including making the distribution of benefits a far less stingy and demeaning process. That means strengthening free healthcare and education—especially given the degree to which women are currently represented in public sector jobs—but also conceiving new industries in which women can enjoy far better wages and the freedom to organise.

Here the possibility exists for public investment and expansion through the cooperative sector, and the array of auxiliary industries that could sustain the revival of food production that is so critical for Sri Lanka to emerge out of economic depression. Future reforms oriented toward self-sufficiency must radically reconceive the gendered aspects of issues such as land rights and land tenure. But all these ideas depend on engaging with women through their representative organisations, and further recognising the unequal reproductive burden that the capitalist system has exploited to justify lowering wages for workers across the board. Only through the widest democratic mobilisation that brings those in the periphery, especially women, into the core of efforts to rebuild the economy, will there be a realistic chance to rescue Sri Lanka from the abyss. To build on the statement released by the Feminist Collective for Economic Justice, then, rather than inserting women as a variable into economic policy-making in a narrow, technical way, let us prioritise the class interests of the working women who actually built the economy.