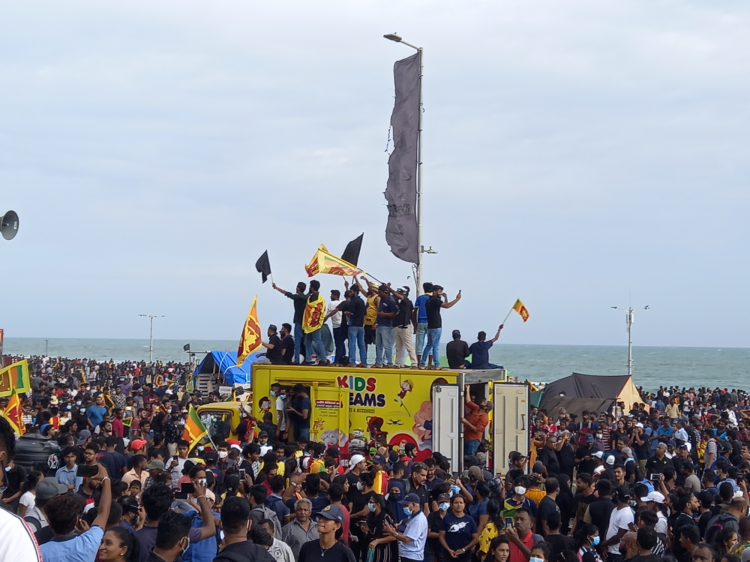 There is a tendency to shrink and reify that which is too big, too complex, and too diverse to otherwise easily talk about. This is often unintentional, an occupational hazard of political commentary; but also often intentional, as a malicious rhetorical device to shrivel an opponent down to size. A common way in which this is done is nominalisation—the process through which aragala becomes aragalaya becomes ‘The Aragalaya’. A verb becomes a noun, a noun becomes an institution.

This nominalisation is sometimes harmless because it’s clear from context what a given speaker means. Perhaps there is some particular angle or aspect that they are interested in, or perhaps it is simply meant as a convenient shorthand and not as a device of erasure. But there is a usage that is not harmless. That is when the purpose of the nominalisation is not to make the complex concrete and the fuzzy focused, but to simply dismiss. You’ve seen that usage many times already in the burgeoning field of applied ranilistics, in its multifarious forms—the paid and the unpaid, the committed and the complacent, the useful idiotariat. We will see it a billion times more. It will always be something on the lines of “Why did the Aragalaya fail?” or “Did the Aragalaya accomplish anything?” or even “We need a new and better Aragalaya.” In every case, the purpose is to shrink, to fixate, to declare game over, or at least the end of an innings, past tense all finished and now moving on. As evidence, you will see cited the “absence” of July 9-type crowds at subsequent protests, or the “change” in the nature and intensity of protest actions, or an overfocus on ‘GotaGoGama’ as the beginning and end of all things.

All this is not just bullshit, but bullshit twice over. First, the massive crowds of July 9th were exceptional by any measure: they cannot simply be treated as a new standard, falling short of which is failure. This is moving the goalposts to a ridiculous degree, especially given that the dynamics that create such a moment are contingent upon so many factors of crisis, organisation, understanding, will, and anger.

Various groups have since claimed responsibility or leadership for July 9, but these claims are put to the lie by their failure to recreate it. Of course they cannot make it happen again; they didn’t make it happen the first time, either. This is not to say something like that can’t happen again, merely that it will not happen—as it did not happen—simply because of a poster with a date on it. It takes more, and not the kind of more you can get from throwing money or marketing. That level of public protest is not the new normal and it cannot be treated as a new status quo. We cannot take any of the massive street protests of the last few months for granted and expect all future agitation to maintain that level at all times or else be judged a failure. When you find yourself thinking this way (and propaganda aside, moving the goalposts is a thing humans frequently do, so most of us will think this way sometimes) remind yourself to stop: it is absurd and harmful to yourself and others.

The government’s centre-leaning propaganda campaign is framed as “Why did the Aragalaya fail?” (as distinct from the government’s right-leaning propaganda campaign, which is simply that the aragalaya are ‘terrorists’; these rhetorics interleave, aimed at different publics) because this is meant to move the needle, to hastily shift all this frightful aragaling to the past, declaring it over and done with and now swiftly moving on, to shift the window of allowed discourse away from the incredibly dangerous ground of massive, cross-class, cross-sector, ideologically multi-partisan public solidarity and a widespread, shared political consciousness with focused goals. The moment of greatest hazard for that consciousness is now, in the achievement of its stated primary, universally shared goal: the resignations of Gotabaya and Mahinda Rajapaksa.

It’s easy to understand that the biggest of the big tents was strong in its unity on this issue—strong enough to bring millions to the street and send the great dictator fleeing into the night—but it’s more difficult to correctly locate its weakness not in the multiplicity and sometimes contradiction of further goals, but in the lack of widespread political awareness or education that would have allowed the integration and organisation of such diverse goals. The achievement of the primary goal underlines that lack by making all the inherent contradictions immediately relevant. In success, the tactically submerged complexity of the various tendencies, politics, and degrees of understanding or directions of thought that made the big tent quite so big must now rise to the surface to contend with each other.

We cannot simply assume unities. They can only be built and tested. The unity that did exist on the singular primary goal, now achieved, was tactical and focused. This is a good thing, because the big tent was rather too big to be coherent in the long term, incorporating many right-wing factions and intent on narrowing scope to ensure unity rather than broadening education to strengthen organisation. Organisation does not begin and end with logistics: it is also about what you think and how you think it, how you develop principles, why you make your choices. The big tent approach, unorganised beyond its singular goal, served its purpose effectively in the short term, and perhaps it will again if similar short-term tactical goals can be agreed upon. So far, attempts to set such an agenda have not worked, but this is a process of trial and error. There will be no shortage of trials to come. The medium-term need is for better political education and organisation at every level. At minimum, this means getting past the ideological blockade of State repression and pro-government propaganda and seeing clearly what has already been achieved, what incredible things are possible.

But this is not failure by any means: this is politics, no more, no less. Politics is not just something that happens in Parliament between (mostly) men in white sarongs—in Sri Lanka, what happens in Parliament is mostly corruption, and politics is something that happens between citizens, on the street, in the home, in the workplace. Every conversation on the side of the road about what’s going on, what it means, what we should do: this, too, is politics. The power struggles within the struggle, with factions that wish to claim leadership each striking out in a slightly different direction from the others and trying to claim the brand Aragalaya, represent only the minutest faction of its politics. The beating heart of politics is people asking themselves and each other: How do we get out of this alive? How do we live? How should we live? You can live in denial of these questions, but you cannot delegate them. In Sri Lanka’s decades-long failure of democracy, many people live in that denial, in the pretense that politics is something that politicians do. When at some point in your life you understand that this denial is a choice, you become part of the struggle. You’re in the aragalaya now.

The aragalaya is not ‘GotaGoGama’. The aragalaya is not even The Aragalaya. This is the other reason why the narrative of the latter’s failure is meaningless: it does not actually exist in that form. It is not an institution that has a board of directors, despite the efforts of both the state to perform a decapitation strike through the abductions, arrests, criminalisation, and demonisation of so many prominently visible activists. The aragalaya is not even ‘the aragalaya’, strictly speaking, it’s to aragala. It’s not The Struggle; this is merely a convenient shorthand to describe struggling. It’s a verb, not a noun. It’s not something that you are, or have membership in; it’s something you do. This is not a movement—there are many movements within it, in this country and across the world and history, but to struggle is part of what it means to be alive. It’s the part of us that fights domination.

Domination is ‘the system’. It has a thousand aspects and avatars, but its characteristics are fixed and recognisable: always the subjugation, exploitation, and repression of some by others. The need to fight domination is present in all of us, even (somewhere in there) within those who choose to side with domination in one or more of its aspects, or those who choose denial that any of this is happening or that they have anything to do with it. Even the bootlicker finds the boot rankles their tongue, no matter how secret they keep the ulcer. This civilisation—late capitalism, the capitalocene, the hellworld, whatever you want to call it—is thick with domination, diseased with it. But where domination exists, there are people struggling against it. This is the best of us.

What’s special about Sri Lanka in 2022 is that millions of people made choices of the kind they had not made before, and took actions they had never done before. In so doing, they kicked the pre-scripted history of this moment, as drafted by its smug, complacent rulers—remember that this was meant to be Gotabaya Rajapaksa’s triumphant first term, consolidating massive electoral wins for the Rajapaksa varietal of Sinhala-Buddhist fascism into an unassailable power base for generations to come—into a somewhat different timeline. Not even very different so far, given the tight focus on effects rather than causes, but that divergence, however small or brief it may be before the inertia of the original timeline reasserts itself, deeply frightened the drafters of history, which is why we now have an entire ruling class, its jackboots, and its assembled sycophantry all getting out and pushing as hard as they can to pop things back into place. They have all the wealth and power, so it is not surprising if they succeed in this, but what matters more is the fact of that divergence, because what has been done once can be done again.

Sri Lanka can never again say that it is impossible to force out even the most powerful head of state with the strongest electoral majority, with the most rigid ideological grip, with the support of one of the largest militaries in the world and more or less the entire capitalist class, and with a tremendous degree of control over the mass media. Until 2022, we would have said such an ouster was indeed completely impossible, quite unthinkable, perhaps even ridiculous to suggest. Now we can say that it is very difficult, requires a confluence of many factors, and comes at great cost, but it can be done. We have learned that apparently nothing is impossible and no power is unassailable. No: we have demonstrated that nothing is impossible. We have learned it from ourselves, because we have taught this lesson.

I connect the aragalaya to the great human struggle against domination to remind us that it’s bigger than any organisational structure, or any given social movement composed of particular groups, or any specific actions. Those things and those people are important, and everyone being arrested, repressed, and harassed by the State must be fought for and protected, but they are always a part of something much bigger. So are we. There is an ocean from which every wave comes. This is the struggle. It cannot be crushed for long, because there are always more of us. It cannot be lied about for long, because there are always those of us who will remember the truth. Nothing is impossible, and nothing is over.

Vajra Chandrasekera has published over fifty short stories in magazines and anthologies including Analog, Black Static, and Clarkesworld, among others, and his short fiction has been nominated for the Theodore Sturgeon Memorial Award. His debut novel The Saint of Bright Doors is out in 2023.