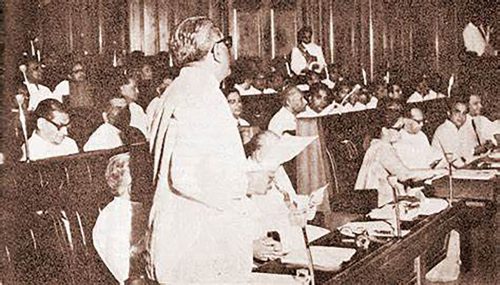 The Left in Sri Lanka—currently more of an aspirational idea, than an active movement—is once again at the crossroads. Those people who at least explicitly self-identify as Left appear to be split between those who see the current regime in power as heading down a dangerous path, versus those who wish to expose the imperial hypocrisy of a narrow group of advocates for democracy. While people may use terms off the cuff—such as socialism or imperialism—only by inserting them into a historical system can we grasp their substantive political implications. Toward this end, an instructive parallel exists with an earlier debate.

An Earlier Debate
Almost 60 years ago, in 1962, in his famous essay ‘Categories of Left Thinking in Ceylon’, Hector Abhayavardhana argued that the Left in Sri Lanka had to choose between the parliamentary or revolutionary path. According to Abhayavardhana, the Ceylonese Left was no longer operating in the world of the Great Depression of the 1930s in which it had emerged. Abhayavardhana argued that the Left must rethink its categories of thought considering subsequent historical experience.

Things had not gone as the Left had originally planned in the 1930s. There was no revolutionary upsurge to overthrow imperialism. Instead, Sri Lanka experienced a relatively peaceful transfer of political power, while remaining trapped within a persistent economic system of unequal exchange. For Abhayavardhana, this among other examples meant that the Left needed to engage explicitly, and in more self-aware fashion, with the tradition of parliamentary democracy.

As he put it, “The Left in Ceylon appears to have recognised this new temper of today in the realm of its practice…The Left has accumulated so much parliamentary experience and skill, that it may be seen to exhibit a certain conceit in this direction. But side by side, especially in the case of the LSSP [Lanka Sama Samaja Party], pronounced guilt feelings attend its parliamentary orientation” (198).

The difference between Abhayavardhana’s time and ours is that to even begin to define the Left, we must first acknowledge the absence of any coherent leadership or organisation that could seriously claim to represent such a movement. Instead, there is a discursive split between two factions of a Left that is far more vaguely defined and far less prevalent than in Abhayavardhana’s moment.

Nevertheless, we again seem to confront the choice between working within the structures of democracy; or seeking salvation in an alternative model outside the existing system. Many have pointed out that democracy itself is a contested concept. It can be defined either from above or below, in elitist or radical terms. As a result, it may be more useful to think about democracy as a terrain of struggle. It requires participants who accept its fundamental role in framing the debate, even if they disagree on what it actually means. In contrast, those even more marginal elements within the Left who interpret China’s rise as a systemic challenge to Western imperialism do not necessarily advocate revolution. But the underlying idea that we can critique democracy from the outside pervades their thinking.

Because of this ethos of suspicion toward democracy, Abhayavardhana’s remarks continue to be relevant. In Abhayavardhana’s time, the LSSP and Communist Party (CP) responded to dissenting groups—which, it should be mentioned, had real movements behind them—that opposed coalition with Sirimavo Bandaranaike’s Sri Lanka Freedom Party (SLFP) in 1964. Abhayavardhana, perhaps the pre-eminent theoretical architect of this coalition, argued that those supposedly more radical elements who were opposed to working in conjunction with the SLFP were ignoring the decades of experience in which the LSSP and CP had effectively participated in the parliamentary democratic system.

Abhayavardhana himself struggled to theorise the relationship between social movements and political parties, and the challenges the Left would face in power as junior partner in the coalition government of the 1970s. These included the dangers of nationalist co-optation. But there is a critical part of his message that we must reaffirm. In Abhayavardhana’s time, the Left was in the ascent, as opposed to its current descent. Regardless, as he recognised, even in his own time its success was hardly predetermined. The overarching moment that we share with him calls not for certainty in the “heroic defence of an emerging socialist system against the attempts of the traditional order to strangle it” (198). Instead, it demands an open-ended method for convincing the majority of people of the left’s ability to make our lives better; or, as he put it, to demonstrate the “dispassionate and purposive application” of our ideas.

But even Abhayavardhana treaded dangerously close to the cult of expertise. We must instead see the application of these ideas emerging through the framing and thereby strengthening of people’s collective responses to the challenges of their everyday lives. Accordingly, for the Left today, which is even further removed from the day-to-day struggles of working people, any effective path must engage the contradictions of the existing system.

To write off democracy as a Western experiment or imperial hypocrisy would otherwise mean dismissing the 90-year vernacular history of Sri Lankan democracy, since universal adult suffrage was established in 1931. That includes the significant expansion of benefits for all that made Sri Lanka a world-famous example within the region, especially in areas such as free healthcare and education, for which working people persistently fought. In response to those who seek salvation from outside the system—whether in an earlier period in the form of revolution, or today in the alternative model supposedly represented by China—we must instead demand a much deeper and sustained interrogation of the actual historical experience of Sri Lankan democracy.

World Historical Experiences
Abhayavardhana’s remarks, which reflect the experience of the Sri Lankan and broader South Asian Left, hearken back to the classical debate within European Marxist circles about the way in which to engage democracy. Major theorists on the pathway between the Second and Third Internationals—Vladimir Lenin, Rosa Luxemburg, and Leon Trotsky in particular—assumed that a concatenation of revolutions across Europe would eliminate the need to confront the fundamental paradox of achieving a more democratic society by imposing the will of the proletariat; an unresolved theoretical contradiction at the core of Marxism’s original formulation.

Or as Isaac Deutscher put it in the first volume of his magisterial trilogy on Trotsky, “This hope underlay all his ideas; it was to give him wings in his ascendancy; and its frustration was to subsequently break and crush him” (2003: 203). The tragedy encompassed the nation-states that led their respective proletariats to mutual slaughter on the battlefields of World War I, the failure of revolution in Central Europe, and the subsequent emergence of fascism in response to this and other crises. Meanwhile, the related inability of the Soviet Union to break out of its political and economic isolation in the critical period of its birth facilitated the rise of Stalin.

When Luxemburg popularised the phrase “socialism or barbarism” she may have hardly thought that people would knowingly choose barbarism. After the rise of Nazism—which involved a combination of marginal victory at the polls, paramilitary terror on the streets, and the support of the business class—we now know that history does not necessarily lead to the collective redemption of the working class. Instead, in the aftermath of war and genocide, we know that defending an existing democracy is often more critical than attempting to forge a new example through revolution.

Toward this end, we must distinguish in history between sincere if boxed-in revolutionary attempts to overthrow absolutist, colonial, and authoritarian governments and those struggles from below to deepen and extend existing democracies. For those of us living in the latter, what matters is whether we envision winning or even preserving entitlements—depending on what must be prioritised at any given moment—as strengthening the democratic project or attempting to replace it.

Given the historical consequences of the latter, we must think seriously about whether this is even a real option. This is especially true when the conditions are even more infelicitous and the collective agency of the proletariat is substituted by a geopolitical actor; in today’s case, China. If a complete break is not a possibility, then for better or worse, the Sri Lankan Left operates within the categories of democracy. That is not to say bourgeois democracy is sufficient—or that we are prohibited from drawing on elements of actually existing socialist states to critique it—but that pushing the boundaries of democracy as it currently exists requires engaging seriously with its own internal contradictions and limitations. This is slow, difficult, and uncertain work.

In contrast, amplifying rhetoric about geopolitical conflict between the US and China by proclaiming the latter as an alternative model to the Western capitalist system, is, at best, a diversion from this urgent task. At worst, it may even contribute ideological cover to nationalist attempts to dismantle whatever remains of existing democracy. The Left may be a cipher for now. But if it is to ever realise its promise again in terms of substantive change toward a better society, then at the very least we must start by comprehending what is at stake in our own historical moment.

Devaka Gunawardena is an independent researcher who holds a PhD from the University of California, Los Angeles.