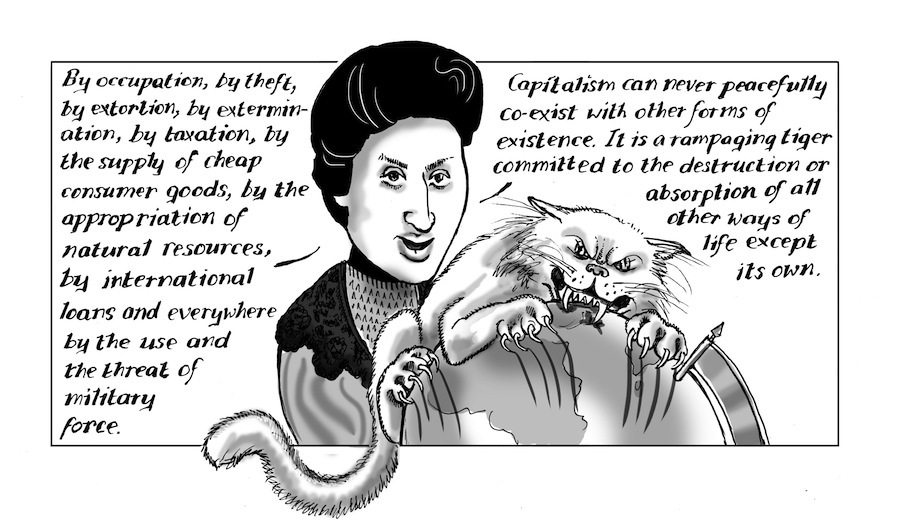 Rosa Luxemburg, the early 20th century Polish-Jewish revolutionary born in Zamosc 150 years ago on March 5th this year, had no reason in her frenetic political, intellectual, and literary activism to attend to an inconsequential island in the Indian Ocean.

However, decades after her murder in Berlin on 15th January 1919, Ceylon (as it then was) would become “a chief outlet, for a little while, of Luxemburg’s pamphlets in the English language”, as Paul Buhle [2015: 215] wryly notes in his Afterword to Kate Evans’ marvellous graphic biography Red Rosa.

Rosa Luxemburg’s perspectives on the struggle for socialism in conditions of capitalist development, militarism and imperialism, and the institutionalisation of trade unions and political parties of the working class – in debate with leading personalities of the European socialist movement including Eduard Bernstein, Karl Kautsky, and V. I. Lenin – were originally written in German between 1898 and 1918.

As Norman Geras has observed, “The diagnosis of the tendencies of capitalist development and the articulation to it of a strategy for socialism; the nature of revolutions outside the advanced capitalist countries and the relationship of democratic to socialist tasks; the place of extra-parliamentary, mass struggle in the battle for socialism; the nature of socialist democracy …” [1983/1976: 10], are questions that she – above all – opened within 20th century Marxism.

After her tragic death at only 47 years of age, the  Communist Party of the Soviet Union (CPSU), victorious unlike its German counterpart in overthrowing the old order, and endowed with state power, contributed to the suppression of the circulation of her writings, particularly where critical of official viewpoints.

Later, Joseph Stalin’s pronouncement that Rosa Luxemburg was a co-author of the “utopian … schema of the permanent revolution” (Stalin 1954/1931) – tainted by association with his arch-rival Leon Trotsky and diametrically opposed to the perspective of constructing socialism in one country, beginning from the Soviet Union – signalled to Communists everywhere that she was out of favour.

It was up to independent Marxists and dissident Communists, who did not enjoy the resources and patronage extended to the Moscow-based Progress Publishers and Foreign Languages Publishing House that published Marx and Engels, Lenin and Stalin, in many languages, to translate, print, and distribute her writings under constrained circumstances.

As late as 1966, the German-born philosopher Hannah Arendt by now domiciled in New York, lamented how little of Luxemburg’s writing circulated in English; recording en passant five works of which she was aware: two of which happened to originate in distant Ceylon [Arendt 1966].

Odd corners
Ceylon was indeed one of the “oddest” of the “odd corners”, as Buhle [2015: 215] justifiably remarks, to publicise Rosa Luxemburg among Western Anglophones, following the emergence of the New Left after 1956.

How did this come to be?

In a British imperial possession in the 1930s, a group of young radical men and women formed the Lanka Sama Samaja Party (LSSP), subsequently an affiliate of Leon Trotsky’s ‘World Party of Socialist Revolution’, the Fourth International [Frank 1979].

The LSSP campaigned for workers and peasants’ rights and against colonialism and imperialism, amidst repression and imprisonment of its leaders by the colonial state [Goonewardene 1960]. This invested a small party (never more than 1000 members before 1970) with societal respect and trade union support disproportionate to its numbers and lack of spread.

Trotsky admired Rosa Luxemburg, and defended her [Trotsky 1973/1932] against political attacks by Stalin. His supporters in New York began carrying English-language translations of her articles from the 1940s in their journals, the New International succeeded by The Fourth International.

These publications travelled with left-wing seamen and soldiers, sometimes as contraband during the Second World War, wherever there were contacts with other Trotskyists, including in Ceylon.

From 1950 onwards, the LSSP had an active English-language publications programme printing pamphlets and short books by Leon Trotsky; in contest with the Ceylon Communist Party (CCP), for hegemony on the Left in the workers’ movement and in electoral politics.

In 1953 and 1955 respectively, Lanka Sama Samaja Publications issued Rosa Luxemburg’s The Crisis in German Social Democracy and The Mass Strike, the Political Party and Trade Unions. These made their way to comrades in New York and London, from where there was further dissemination.

However, all the quotes from Trotsky were to be no defence to the LSSP’s subsequent embrace of reformism. To borrow from Luxemburg (writing with reference to the German Social Democratic Party—SPD): the “… tendency in the party to regard parliamentary tactics as the immutable and specific tactics of socialist activity” [1970/1904: 121], displacing extra-parliamentary and mass mobilisation, became pre-eminent in the Ceylonese Party too.

The LSSP adapted to the long-standing perspective of the Ceylon Communist Party on the need for an alliance between the Left and the ‘progressive national capitalist’ Sri Lanka Freedom Party (SLFP), against the ‘reactionary comprador capitalist’ United National Party and imperialism (symbolised by the presence of British military bases and US oil companies).

In 1960, the LSSP and the CP separately entered into no-contest and mutual support pacts with the SLFP. Four years later, both Left Parties joined a cross-class (‘popular front’) coalition government led by the SLFP [Germain 1964]. Once described by the leadership of the ‘Old Left’ as a tactic, it is to the present day their staunch strategy, except now unvarnished by reference to socialism.

‘Young Socialist’
By 1961, some on the LSSP Left began publishing a non-party journal called Young Socialist. Its name was inspired no doubt by the newly formed youth organisations of the US Socialist Workers Party and the British Labour Party (in which the Trotskyist Socialist Labour League was then active).

The co-editors were May Wickremasuriya and Sydney Wanasinghe, occasionally joined by Osmund Jayaratne, R. S. Baghavan, and Wilfred Pereira. They were not young themselves but assumed their audience to be the Youth Leagues of the LSSP, which is how sympathisers and candidate members of the Party were organised.

Its first editorial explained that there was much talk of socialism in Ceylon but no clarity on what it meant. “(W)hat are the essential foundations and features of such a [socialist] society and how can they be laid and developed? Indeed, what precisely is the nature and organisation of the society in which we live and which we seek to change?” [1961: 3].

Rosa Luxemburg’s essay on The Progress and Stagnation of Marxism [1903], translated by Eden and Cedar Paul, was to appear in its pages in 1967. The journal folded in 1970 as its supporters went their separate ways. A revival in 1980, now back in the LSSP fold, only managed to put out two issues. It had a third incarnation as an imprint between 1996 and 2007, publishing several book-length collections of historic documents of the Left movement in Sri Lanka.

The animator of the Young Socialist was the indefatigable Sydney Wanasinghe [Perera 2009]. In addition to the magazine, he issued pamphlets by Trotsky including the out-of-print classic The War and The International [1915/1971], first translated and published in English in New York as The Bolsheviki and World Peace [1918]. Wanasinghe was also the local agent for Pioneer Press, Monthly Review Press, and Merlin Press books. He founded the Suriya Bookshop in 1964, which he ran mostly out of his home, almost until his death in 2007.

Among the titles distributed by him was Rosa Luxemburg’s The Accumulation of Capital [1913/1951], subtitled ‘A Contribution to an Economic Explanation of Imperialism’ and translated by Agnes Schwarzschild; with an introduction by the British left-wing economist Joan Robinson who herself visited Ceylon in 1958 to advise the government’s Planning Secretariat.

Dissemination
Wanasinghe’s main involvement in the dissemination of Rosa Luxemburg’s writing outside of Ceylon, was to publish what remain her best-known writings as portable pamphlets. This was on the insistence of Osmund Jayaratne, recalls T. M. R. Rasseedin of the LSSP’s Ceylon Federation of Labour (Personal Communication).

Socialism and the Churches [1905] was issued in 1964, based on the translation by Socialist Review (Birmingham, England). The Mass Strike, The Political Party and The Trade Unions [1906] appeared in 1964, as translated by Patrick Lavin. Social Reform or Revolution [1900] was released in 1966, from the translation by the anonymous Integer. Spartacus [1918] appeared in 1966, as translated by Eden and Cedar Paul. ‘The Crisis in the German Social Democracy’ better known as ‘The Junius Pamphlet’ [1915] followed in 1967, based on the translation by the New York-based Socialist Publication Society. What is Economics? [1954] was released in 1968, as translated by Theodore Edwards (pseudonym of Edmond Kovacs). 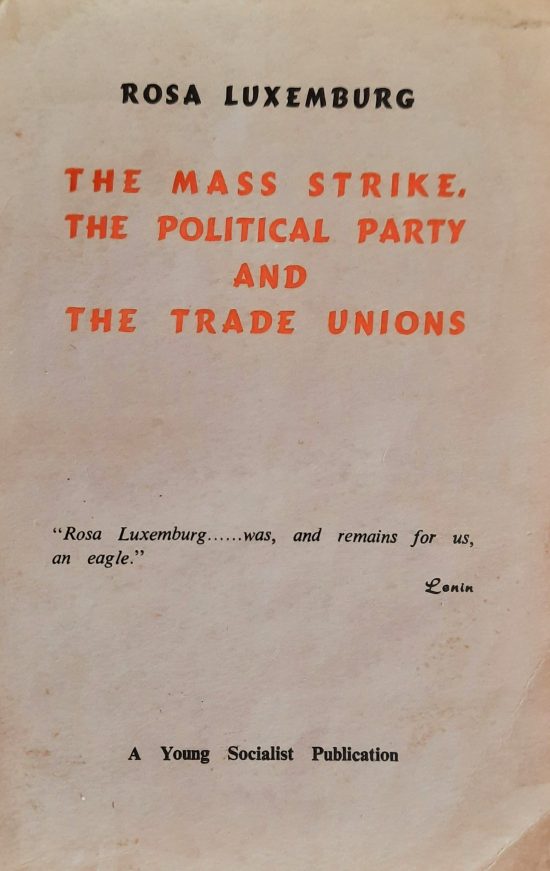 What is missing from this list are two important contributions to revolutionary theory and praxis: Organizational Question of Social Democracy [1904] and The Russian Revolution [1918].

Neither of these texts was published by the US Trotskyists – who were the primary source of the English-language translations relied upon by their Ceylonese comrades – until 1970. However, both articles were in print in English titled The Russian Revolution and Leninism or Marxism? [Luxemburg 1961] – based on Bertram D. Wolfe’s 1940 translation in the US Workers Age newspaper – and therefore neither unknown nor unavailable.

Why this omission? Among both the US and Ceylonese Trotskyists, there must have been discomfort in Luxemburg’s critique of the Bolshevik organisational model, valorised by the older Leon Trotsky and his adherents; and on the first steps of the 1917 Russian Revolution under Lenin and Trotsky’s leadership.

In Luxemburg’s estimation, and finding confirmation in the 1905 Russian revolution to which she was eye-witness in Tsarist Russia-occupied Poland, it was not the leaders and leading bodies of socialist parties, but the “great, creative acts of the often spontaneous class struggle seeking its way forward” that rightly shaped the policy of the socialist movement [Luxemburg 1970/1904: 121].

Her prescient warning to the Bolsheviks of the dangers of an ultra-centralised party (constructed no doubt in conditions of illegality and Tsarist persecution), which she argued concentrated power in the ‘intellectuals’ staffing its highest administrative structures went unheard.

“Historically, the errors committed by a truly revolutionary movement are infinitely more fruitful than the infallibility of the cleverest Central Committee” [Luxemburg 1970/1904:130].

Years later in 1918, writing from a German prison cell, Luxemburg hailed the party of Lenin as the only one which by its demand – ‘All power in the hands of the proletariat and peasantry’ – took the Russian revolutionary movement forward to break with capitalism.

Welcoming the October 1917 uprising, she nonetheless cautioned the Bolsheviks against counter-posing the ‘dictatorship of the proletariat’ to ‘democracy’.

Socialist democracy
“Socialist democracy begins simultaneously with the beginnings of the destruction of class rule and of the construction of socialism. It begins at the very moment of the seizure of power by the socialist party. It is the same thing as the dictatorship of the proletariat” [Luxemburg 1970/1918: 394].

She insisted that, “Freedom only for the supporters of the government, only for the members of one party—however numerous they may be—is no freedom at all. Freedom is always and exclusively freedom for the one who thinks differently … Without general elections, without unrestricted freedom of press and assembly, without a free struggle of opinion, life dies out in every public institution, and becomes a mere semblance of life in which only the bureaucracy remains as the active element” [Luxemburg 1970/1918: 389 & 391].

The intention here is not to disown Lenin in order to deify Luxemburg. It is instead, as she demonstrated by example, to have a critical appreciation of Marxist theory and praxis. Any renewal of the socialist project in the 21st century must assimilate her insights on democracy and freedom as both means and end.

So much for the role of Ceylonese leftists in the production and dissemination of Rosa Luxemburg’s writings in English, in an authentically internationalist undertaking, spanning continents and oceans. What of their reception in Ceylon/Sri Lanka? That unhappy tale must wait another time.

For now, in this 150th birth anniversary year, it is enough to apply her epitaph on the lost socialist revolution in Germany to herself: “I was, I am, I shall be!”