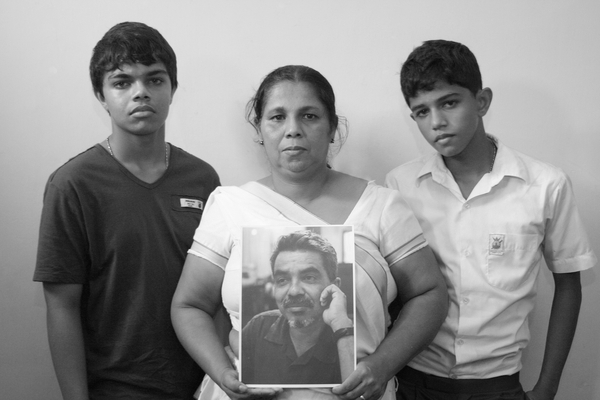 The writers were at the table, eating each other’s words. Delicate morsels of sliced crime, tangy segments of romance, silver spoonerisms washed down with a glass of iced humour that turned the lips green.

‘How delightful’, one cooed, ‘I must try this at home.’

The wine critic was not sure. She would like to have sampled some rough shreds from a local saga of lost lives, but didn’t want to be first. She settled for some pickled irony instead. She might fold the saga in her napkin and eat it later in the leisure of her hotel room.

But the local saga with its siren-red chunks was a different matter. And so were some of the short shots of poetic violence that she’d tried that morning. A caffeine kick, those poems made her wake to where she was.

She was about to reach for the saga when someone staggered forward with a dish too bizarre for words. A giant black and white cartoon of a man’s face slashed by a cross of two chillies upon the lips.

‘My husband,’ said a woman, proffering the placard and a sheaf of printed leaves. ‘This is about my husband who’s gone. Please take and read. Read and eat at the same time. It is possible, no?’

‘My husband,’ she repeated with a hunger they did not understand. ‘He was a writer like you but disappeared last year. He wrote words the government did not want to hear.’

A plate of silence was served that made them feel hollow inside.

‘What words?’ offered the wine critic. ‘What words did your husband say?’

The woman shook her head.

‘His words have gone with him. That is why I am here. I am looking for him in your feast of words.’

Minoli Salgado is Professor of International Writing at Manchester Metropolitan University. This short story was previously published in Salgado's collection of short stories, Broken Jaw, (87 Press, 2019), and also published online by English PEN. Broken Jaw was shortlisted for the Republic of Consciousness Prize and longlisted for the Orwell Prize for Political Fiction. Salgado’s publications include the novel, A Little Dust on the Eyes, the critical study, Writing Sri Lanka: Literature, Resistance and Politics of Place, and a new book of narrative non-fiction, Twelve Cries from Home: In Search of Sri Lanka’s Disappeared.